Was Emmett Till's Grave Dug Up and His Remains Destroyed?

We've endured an awful lot this week with the number of unexpected deaths — and it would be far too much for the world to cope with news of the late Emmett Till or any other historic figure having their graves dug up and their remains destroyed and their plot replaced by another. I would think the world would surely be coming close to an end.

It's sickening to hear that employees at a historic African-American cemetery near Chicago allegedly dug up more than 100 graves as part of an off-the-books scheme to resell burial plots to unsuspecting customers, authorities said Wednesday.

The workers at Burr Oak Cemetery, where lynching victim Emmett Till, blues legend Dinah Washington and some Negro League baseball players are buried among others, allegedly resold the plots, disinterred the caskets, dumped the remains and pocketed the cash, Dart said.

At least four people are in custody facing a slew of felony charges, authorities said. The current owners, who could not be reached by CNN for comment Wednesday, have run the place for more than five years, but are not believed to be involved, Dart said.

“We are sensitive to the fact that individuals have loved ones buried here and also the sensitivities as it pertains to this particular cemetery,” Dart said. “This is the cemetery were Emmett Till is buried. Numerous other significant members of the African-American community are buried there as well.”

He said authorities are “very confident” that the grave of Till, whose lynching at 14 helped spark the Civil Rights Movement, has not been disturbed.

Broken. Rusted. Battered. The image of a glass-covered casket with the body of Emmett Till was shown around the world in the 1950s. But on Thursday, as hundreds of African Americans searched frantically for the graves of love ones, the battered casket of Till was rusting in the back of a shack at Burr Oak Cemetery in Alsip. 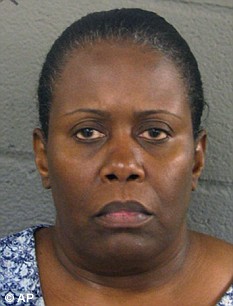 The casket was surrounded by garbage and discarded headstones strewn about like litter.

“When we opened it up trying to find what we have, a family of possums ran out,” said Cook County Sheriff Tom Dart.

Lester Barclay, an attorney for the Emmett Till Foundation, said family members of the civil rights icon will meet this weekend to decide whether they want his remains to remain there.

In June 2005, Till's body was exhumed during an investigation of his death. As is customary, he was not reburied in the same casket.

The original casket was supposed to be part of a planned memorial for Till at Burr Oak Cemetery, but the donations for that memorial were allegedly pocketed by a woman who has been charged in this ghoulish scheme.

Towns is accused of masterminding the excavation of 200 to 300 bodies that were loaded on dump trucks and tossed in a “dump area” so their plots could be resold for cash. Three other cemetery workers also were charged.