We Know It's Bad When We Have To Sell Goods for GAS, Not Cash

HARARE, Zimbabwe (AP) — Reeling from the highest inflation rate in the world, barred by the government from using U.S. dollars for purchases, Zimbabweans turned to a new money source Wednesday: gasoline coupons. 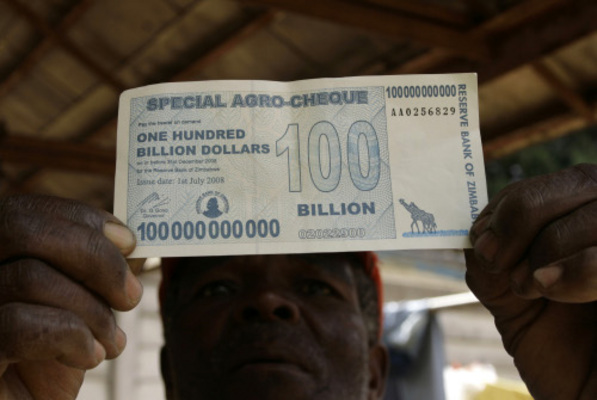 The move reflected the complete chaos of Zimbabwe's financial system, where prices are openly quoted in the American currency, in Zimbabwe's own new currency that came out Friday, and in its old denominations, which have 10 more zeros than the new bills.

Even coins have returned to circulation after being abandoned in 2002.

Auctioneers Hammer and Tongues announced the first “auction by barter” to be held Friday. Dozens of cars and other goods will be up for bids payable in gas coupons instead of hard currency and the government says the system is legal, the auction house said Wednesday.

“Homegrown solutions for Zimbabweans. Now we are selling in liters (gallons) not in dollars,” the statement said.

Bidders must put down a deposit of 220 gallons of gas coupons, worth about $1,500 at the current gas price in Zimbabwe, and pay the rest in coupons when they pick up their purchases.

Zimbabweans face acute shortages of local currency. Already gas coupons can be used to pay some household accounts. Many businesses also pay workers part of their earnings in scarce foodstuffs, or demand dollars for purchases, which is illegal.

“Where coupons become a currency it reflects the rapidly falling value of the Zimbabwe dollar. Barter selling provides something that holds its value,” said independent Harare economist John Robertson.

Private financial institutions say Zimbabwe's inflation rate was about 12.5 million percent in May and estimate that it has likely climbed to 50 million percent this month.

On Aug. 1, the central bank slashed 10 zeros from the plummeting local currency and Reserve Bank Governor Gideon Gono warned companies against doing business in U.S. dollars. He said such transactions were still illegal and should be reported to police.

Obsolete coins have also been revalued, sending Zimbabweans hunting for coins they squirreled away in recent years.

Shops battled to count heaps of coins, causing long lines at checkout counters. One enterprising Harare business on Tuesday advertised coin weighing machines that even banks had discarded after coins went out of circulation in 2002.

Shopping and visits to cafes and restaurants became further confused this week by a range of different exchange rates used against the U.S. dollar.