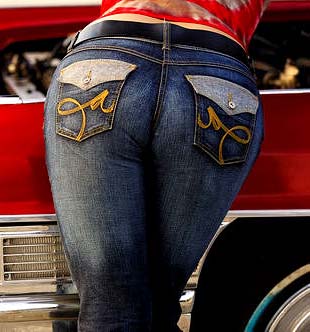 Research suggest that wearing skin tight jeans may cause a temporary bout of a nerve condition called meralgia paresthetica, also known as “tingling thigh syndrome.” The condition can happen when constant pressure from the skin-tight denim cuts off the lateral femoral cutaneous nerve, causing a numb, tingling or burning sensation along the thigh.

“The nerve, in some people, is susceptible to compression,” says Dr. John England, a New Orleans neurologist and a member of the American Academy of Neurology. The femoral cutaneous nerve, he explains, runs from the outside of the pelvis and through the thigh. “It is a pure sensory nerve — it doesn’t go to muscles or provide strength. Anything that is tight around there could potentially compress the nerve that goes there.”

Pair those skinny jeans with a pair of sky-high heels, and your risk for upsetting this particular nerve increases, as Ghoman discovered the hard way. Dr. William Madosky, a chiropractic physician in Richmond Heights, Mo., says that high heels increase the chance for the numbing sensation because the teetering shoes tilt the pelvis forward, increasing the pressure on the nerve.

Of course, this isn’t the first time that blue jeans have been considered a health hazard. The super low-rise jeans that were especially popular in the late 90s and early 2000s were also linked to meralgia paresthetica. And in the 1970s, rumors circulated of snug jeans causing infertility in men and yeast infections in women.

But for those suffering from tingly thighs, there is little risk for permanent damage, most experts say. “Typically it’s not permanent,” Madosky says. “The key is, you remove the pressure, and the nerve regenerates.” source: MSNBC