100 SICK: Applebee's Got Fecal Matter on The Menu? 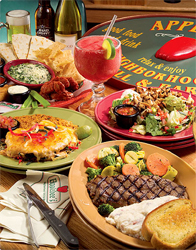 I'm sick just reading that 100 people got sick after eating and/or drinking some strange form of fecal matter at Applebee's? WTH?

I won't dare post a picture of that. Just imagine… Ok, nevermind.

Health officials say more than 100 people reported getting sick after eating at an Applebee's restaurant near Syracuse in New York.

The county health department says there are seven confirmed cases of Shigellosis among people who ate at the Applebee's in Camillus in early March. The bacterial infection is associated with consuming water or food contaminated with fecal matter.

Health officials advised about half of the more than 100 people who complained of illness to get tested for Shigellosis.

Investigators haven't identified the source of the bacteria. They are focusing their investigation on lemons and limes.

The restaurant is cooperating with investigators and remains open. A man who said he was the manager referred questions to county health officials.