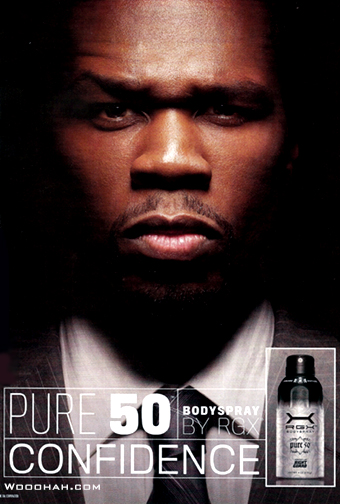 Say what you want about 50 Cent but the man is doing his thing ranking high in the dough category. Perez Hilton recently reported him making just as much as Oprah. I'm not too sure I would go that far, but he's definitely climbing the charts coming in second on the list of Top Earning African American Stars by Forbes.

The In Da Club hitmaker has created his own empire through a series of lucrative deals – including establishing his own book publishing company, creating his own clothing line, working with Coca-Cola-owned brand Vitaminwater to release his own branded beverage, and teaming up with Right Guard to launch his own body spray..

It is now said that aside from all of 50's other accomplishments, he is launching his own range of beauty products. That's right, BEAUTY PRODUCTS.

He has reportedly put his music career on hold to focus on the new products, designed for men who like to be “pampered.” The line will include a moisturizer and night creams.

A source said: “Fifty prides himself on having a ripped body… he’s on a health kick and barely touches alcohol.”

“So his range will be for the guy who likes to be pampered.”

Earlier this month, the hip-hop star announced plans to develop a range of vitamin-enriched pills, but refused to give further details.

He said: “Right now, I’m interested in dietary supplements. I’ll be coming up with something very soon.”

“I can’t tell you what it would be called. I’d be blowing the big launch party!”

The rapper also recently revealed his toned physique was the result of “girly” weight-free routines rather than pumping iron.

He said: “It’s intense, and there are no weights involved. And some of it’s like girly stuff, like just kicking your leg, but it’s muscles you don’t really ever work at.”

So again, say what you want about “Curly”, I mean 50 Cent (Mr. Curtis Jackson), I'm sure he's having fun merely “entertaining” all his haters and his fans while taking very good care of himself and LHBAO all the way to the bank.