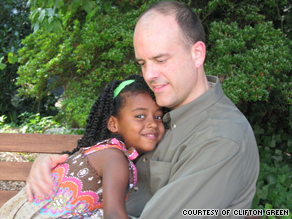 Ahhhhhh — what would Black in America be without another one of those good old black culture hair stories?

In this episode, we have a white couple who has adopted a beautiful Ethiopian daughter — one of their goals was to learn how to care for and style her hair.

From CNN: When Clifton Green and his wife adopted an adorable little girl from Ethiopia, they knew they would eventually have to deal with the hair issue.

The Atlanta, Georgia-based couple, who are white, had read books about trans-racial adoptions that addressed how to deal with Miriam’s springy curls that grew in full, dark and strong after a toddler-hood of baldness.

Green took it upon himself to learn how to care for and style his daughter’s textured tresses.

“We didn’t have any skills, but we had the desire,” said Green of learning to do his now 5-year-old daughter’s hair. “It’s the culture, it’s important and we want to honor it and respect it.”

Green acknowledges that he has not reached that level of artistry yet, but takes pride in styling his daughter’s hair well.

The ritual of doing Miriam’s hair is not only a time of bonding for the pair, but also an opportunity for him to honor his daughter and her heritage.

Green has kept his sense of humor about the many people who express surprise that he is so well educated about and skilled with black hair.

“I don’t want people to look at her and tell she has white parents,” he said, laughing.

You can read the full story along with several CNN iReporter hair stories and expert opinions on black and biracial hair here.