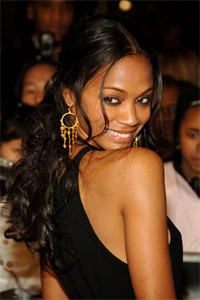 Zoe Saldana is on a roll with her role in the box office hit film, Avatar. I’m guessing when you land one big gig, all the rest follow.

PEOPLE magazine is reporting that Saldana has just been named the newest face of an Avon fragrance, Eternal Magic, debuting in April. According to an Avon press release, the fragrance “takes inspiration from the rare Princess Monaco Rose.”

“It means so much to me to be associated with a company that shares my values and believes in empowering women,” says the actress, who is now best known for kicking butt as Na’vi warrior princess Neytiri in Avatar.

In her first major endorsement deal since James Cameron’s blockbuster grossed a billion dollars, Saldana will also be featured in the company’s brochure as a face of Avon’s color cosmetics collection (no word on whether that includes ‘Pandora blue’!).

In other beauty related news, who would have ever guessed Saldana likes to dress like a man?

In past interviews, Saldano revealed that she loves wearing men’s clothing and underwear.

“I love wearing men’s clothing and underwear. I just feel so sexy in jeans and a man’s shirt. Plus I love back, red. I love solid colors that say ‘I’m here; I’m strong’,” Fox News quoted her as saying.

“Growing up, my dolls were doctors and on secret missions. I had Barbie Goes Rambo,” she added. 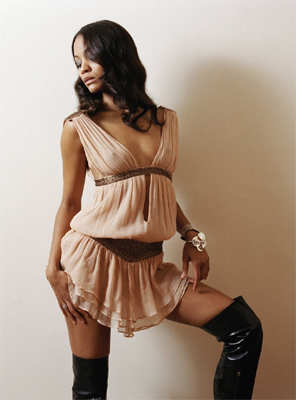 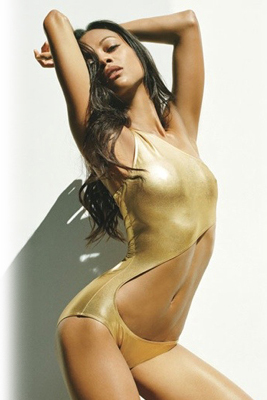 “I have a very strong character and I like to be challenged. Men’s clothing makes me feel empowered so I often wear a man’s suit. Sometimes I think I should have been born a guy! I wear black a lot and I like solid colors. Like me, they’re independent, bold and decisive.”

The strong, independent woman and Barbie bit I might buy, but the rest of the story, I’m not convinced. All I’ve ever seen her in were a lot of pretty dresses.