I'll have to admit, this is my first time reading this headline, and when I did, my eyes got big, like WHAT?!?! lolol

As the story went, the Rev. Al Sharpton held a press conference to blast Tiger Woods for the lack of diversity among his mistresses. Sharpton claims that the lack of African-American women among Woods’ harem will have a negative affect on the black community, specifically young black girls. 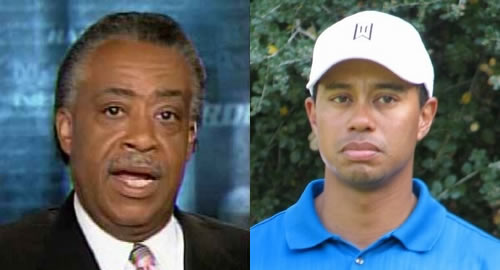 The article went on to quote Sharpton as saying, “Why is it that a man who calls himself Black can’t bring himself to cheat on his wife with a Black woman?…. What does it say to young Black girls everywhere when you pass them over? Shame on you, Tiger Woods. What would your daddy say?”

According to afro.com, the story began on the blog CelebJihad, and was picked up by a handful of right-wing and even politically-neutral blogs and Twitter users, who responded with outrage.

But as it turns out, the story is bogus!  So PLEASE, as ridiculous as it all sounds, and as much as some of you who love drama may want the story to be true, don't believe the hype!