Beyonce showed off her wedding ring at Fashion Rocks last week which is valued at $5 million according to reports. If this is true, this makes Beyonce’s ring one of the most expensive (if not THE MOST EXPENSIVE) wedding rings to date.

I was trying really hard to find out the value of Jada Pinkett Smith’s ring (shown below) since the paparazzi flashed a close up of it a couple days ago, but to no avail could I find that info. The most I learned is that it’s supposedly 12 carats. I guess that will have to satisfy my curiosity.

I’m totally not mad at Beyonce for flossing. Besides, with Jay supposedly being the highest paid rapper, he definitely had to outshine everybody else. You know how rappers do (like way too much then file for bankruptcy).

Jay’s net worth is rumored at 940 million according to Wikipedia, so, he really had no choice but to be one of the most high and almighty one’s, and spoil his girl.

I can’t wait to see what Naomi Campbell’s ring will be worth, being connected with a billionai 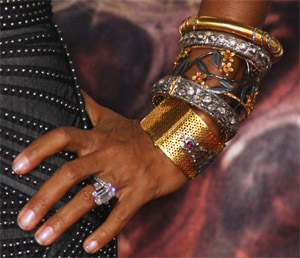 Taken from a 2007 report, the following are the top 10 most expensive engagement rings:

10. Ben Affleck has proved numerous times that when it comes to romance he is a big spender. Despite costing half as much the notorious J-Lo engagement ring, his promise to wed Jennifer Garner set him back 500,000 dollars.

9. When Tony Parker made up his mind to propose to Eva Longoria, he commissioned famed jeweler Jean Dousset to create an original emerald cut diamond ring with an estimated value of over 500,000 dollars.

8. It is a wonder that Brooke Mueller can lift her hand at all after fiancé Charlie Sheen placed a huge Radiant Cut, Yellow Diamond Engagement Ring on her finger when the couple became engaged this year. The price tag? Upwards of 550,000 dollars.

7. When Prince Charles proposed to Camilla Parker on bended knee, he was holding a square-cut diamond ring worth an estimated 1 Million dollars – a very warm welcome to the royal family for Camilla.

5. Tom Cruise showed no uncertainty in his desire to wed Katie Holmes when he presented her with an Edwardian style oval shaped diamond ring rumored to have cost upwards of 1.5 million dollars. One has to wonder if Katie did a little jumping on the couch herself.

4. When Michael Douglas asked for Catherine Zeta-Jones’s hand in marriage, he gave her a 10-carat marquise cut, antique diamond engagement ring with an estimated value of over 2 Million dollars.

2. When Donald Trump fastened a gigantic 15-Carat diamond to Melania Knauss’s finger for their engagement in 2004, the billionaire proclaimed that it was the most expensive engagement ring in history. And with a price tag of over 3 million dollars he was right – for awhile.

1. Paris Hilton’s 24-carat emerald cut diamond ring marked Paris Latis’s promise to wed. With an estimated value of 4.7 Million dollars the ring is more than enough to earn the pair of heirs the number one spot on this list. The engagement lasted only 5 months and the ring was later auctioned off for charity by Hilton.