Beyonce Wants To Be The First Black Wonder Woman

Beyonce claims she wants to be the first black wonder woman. I have to ask, with the recent election for “The First Black President”, is that where Beyonce came up with the idea?

In a recent interview with the LA Times, Beyonce states: “I want to do a superhero movie and what would be better than Wonder Woman? It would be great. And it would be a very bold choice. A black Wonder Woman would be a powerful thing. It’s time for that, right?” 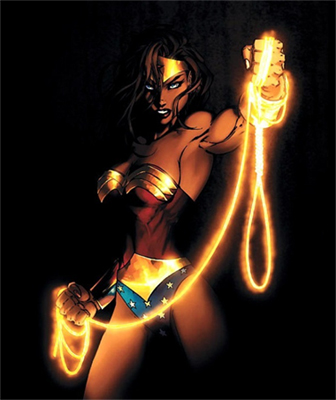 Beyoncé says that she has met with representatives of DC Comics and Warner Bros. to express her interest in a major role in one of the many comic-book adaptations now in the pipeline following the massive success of “The Dark Knight,” “Iron Man” and the “Spider-Man” and “X-Men” franchises. Beyoncé’s acting to career to date has included a comedic role in “Austin Powers in Goldmember” and two notable music world roles, the first as a quasi-Diana Ross character in “Dreamgirls” and as the defiant and heroin-addicted Etta James in the upcoming “Cadillac Records.”

“After doing these roles that were so emotional I was thinking to myself, ‘OK, I need to be a superhero,'” Beyoncé told me this week when I met her for an interview in a suite atop the Rivington Hotel in New York. “Although, when you think about the psychology of the heroes in the films these days, they are still a lot of work, of course, and emotional. But there’s also an action element that I would enjoy.”

The recent success of sophisticated comic-book adaptations is the main reason for Beyoncé’s interest, she said, but her focus on Wonder Woman was intensified earlier this year when she saw Lynda Carter’s costume from the 1970s television show on display at the Costume Institute’s “Superhero” show at the Metropolitan Museum of Art. Beyoncé is in amazing shape right now (she had gained more than 20 pounds for the James role and came back from that leaner than before), but she said the Wonder Woman costume is an unforgiving one.

“I would definitely have to keep it right for that costume. The way that Lynda Carter wore it, she was sooo fine. She was amazing. I saw her costume at the Met. Her waist was unbelievable. It was pretty crazy, actually, her proportions. But I love Wonder Woman and it’d be a dream come true to be that character. It sure would be handy to have that lasso. To make everybody tell the truth? I need that. It would come in very handy.”