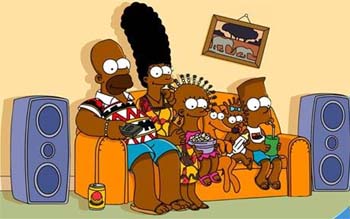 The Simpsons, America's best known animated family, have been given an African makeover to celebrate the first time the comedy cartoon is broadcast on the continent; but unless you reside in Africa, you probably won't get to view this historic episode.

Since it was first broadcast in 1989, 441 episodes of The Simpsons have been shown, making it the longest-running American sitcom in history.

Homer, Marge, Bart, Lisa and Maggie received a cultural transformation by an advertising agency in Angola to mark the occasion, in which they were given brown skin instead of their usual yellow.

To make them appear more like a typical Angolan family, Marge has also been given a black Afro hairstyle instead of normal blue bouffant, while Lisa's hair is stood up on end in short braids.

The image also shows the family dressed in clothes bearing traditional African designs and they are all wearing flip flops.

The program, in which their original features will be kept, will be shown on Africa's digital satellite television service DStv.