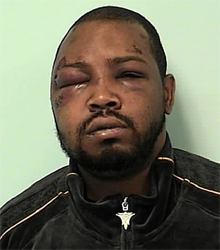 A criminal investigation has been launched against a white police officer involved in a traffic stop and shown beating a black male suspect with a flashlight.

The internal and criminal investigations began as Melvin Jones III was being treated for fractured bones in his face, a broken finger and a partially blind eye stemming from the Nov. 27 incident.

Sgt. John Delaney said late Thursday that patrolman Jeffery Asher is seen on video shot by a witness beating Jones with a flashlight. Three other officers were at the scene. Asher was suspended for six months without pay in 1997 when another video showed him kicking a black suspect who had already been subdued by two other officers.

Jones has pleaded not guilty to drug possession and other charges filed by police.