2009 has been a mean year with messy celebrity divorces and domestic violence in the media.

It seems it all started with Chris Brown jumping on Rihanna for having a jealous fit over another woman sending him a text message.  Then Tiger Woods went out hard after his wife Elin tried to take his head off with a golf club for having extra marital affairs.

OH, and even though it happened late 2008, let's not forget about actress Lisa Raye going pit bull on her husband Mike Misick for only God knows what, and rapper 50 cents baby mama drama which resulted in the house getting burned down.

In more recent news, actor Charlie Sheen lost his mind on Christmas Day when he pulled a knife on his wife Brook for threatening to divorce him and take their 9 month old baby away.

It's also alleged that singer Mary J. Blige slapped her husband Kendu around after his hormones got the best of him at Mary's album release party.

It's bad when you can't go to a nightclub and have a good time with your significant other without having to put a beat-down on 'em for allegedly flirting with other people.

It wasn't very long ago that Miss England lost her control first, and then lost her crown for jumping on another woman in a nightclub — all behind a man. 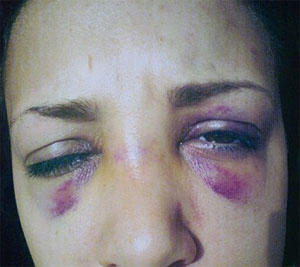 However, this latest episode that has taken place with former Playboy of the year, Louise Glover, just takes the cake.

The photo shown is the battered and bruised face of the woman who was viciously attacked by Glover, and were taken days after DJ Maxine Hardcastle was assaulted by the former Playboy model of the year in a nightclub toilet.

According to the Daily Mail UK, Glover, 26, flew into a jealous rage after accusing Miss Hardcastle of 'looking' at her husband Ben Porter.

She broke the DJ's nose after smashing her head against a toilet ten times, ripped out clumps of her hair as she tried to flush her head down the toilet.

After a jury of two women and nine men at Hove Crown Court took less than an hour to convict her of assault occasioning actual bodily harm, the model fell to the floor howling and screamed hysterically: 'You've ruined my life, I'll never be on TV anymore!'