Ready for his new role on Two And A Half Men, Ashton Kutcher shows off his two-story, 53ft long, 30-ton luxury trailer ‘mobile estate’.

Designed by Ron Anderson of Anderson Mobile Estates, this beauty goes for $8,750 a week, and features side sections and a second floor that hydraulically emerge from the main body to offer a total floor space of 1,100 sq ft., and comes equipped with 60in 3D plasma screens, a vast living area, two bathrooms, a kitchen with granite surfaces and a conference space, the Daily Mail UK reports.

Cameras mounted on the outside of the trailer offer 360-degree video security and surveillance. When a visitor hits the doorbell, the volume on the stereo system and TV drops inside and the image of the visitor appears on the various screens located throughout. One client insisted on a thumb scanner entry system for the master bedroom.

The furniture is specially designed to fold or collapse in order to accommodate the retractable top and side sections. U.S. law dictates that the height of the vehicle must be no more than 13ft 6in when on the road; with the second story fully extended the ‘Baby Girl’ stands at a whopping 15ft 10in. 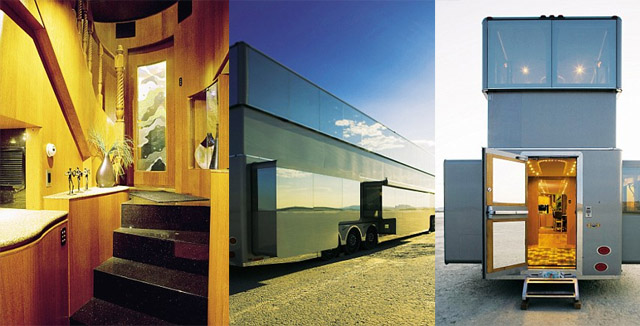 The outside patio area is fitted with wind sensors so the electric awning retracts automatically in gusty conditions. Inside, a wireless touchscreen remote controls heat, air conditioning, brightness and the blinds.

While shooting Men In Black III, Will Smith used a model called ‘The Heat’. It was kitted out with a full recording studio, sound booth for voiceover work complete with glass door that sensors  change from clear to opaque, a make-up mirror that doubles as a television (one of five 42in plasmas on board), a play area for his children and even a chess room.