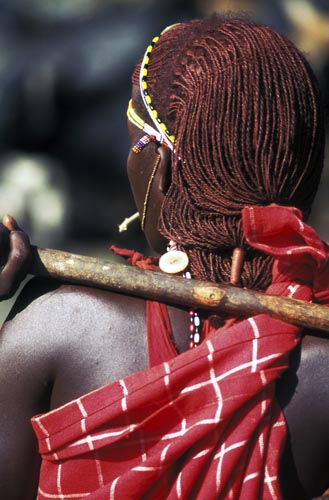 A West African immigrant pleaded guilty to his role with running a human trafficking operation that investigators say forced women to braid hair for up to 14 hours a day at salons in Newark and East Orange New Jersey.

Apparently attempting to abandon the serious economic problems in Africa, Lassissi Afolabi, 46, and his ex-wife Akouavi Kpade Afolabi manipulated a visa program to smuggle up to 20 girls and women (ranging in ages from 10 to 19) from villages in Ghana and Togo into the United States.  Once here, they seized the victims passports and visas and forced them to braid hair for up to 14 hours a day, seven days a week, authorities said.

Here in the United States, most hair salons charge a minimum of $100 to $200 for African hair braiding — so doing the math, the girls brought in a fairly decent daily income. But according to authorities, Afolabi admitted that the girls were not allowed to keep any of the money they earned and turned it all over to the Afolabi's as they received it.

However, Afolabi's ex-wife, who is said to be the ring leader has a different story.  She claims the girls were treated well and paid generously. She also believes the case stems in part from prosecutors not knowing anything about West African culture.

Some of the Afolabis' alleged victims recalled living in ramshackle houses with dirt floors in the home villages. Once in the United States, they lived in East Orange with Afolabi and his ex-wife in a house where rules were harsh and punishments were worse, authorities said.

They were forbidden to make friends, learn English or venture alone in public without permission, prosecutors said. Those who disobeyed were beaten, prosecutors said. “These young women were forced to work for nothing to satisfy the greedy motives of the defendants,” said Ralph J. Marra, acting U.S. attorney for New Jersey “The dignity and basic human rights of the victims clearly meant nothing to this defendant or his co-conspirators.”

Afolabi admitted trying to have sex with one of the girls, who was under 18, during a trip to North Carolina, where he hoped to open a hair-braiding salon.  According to authorities the girl begged him not to do it screaming, “you are old enough to be my father.”

He pleaded guilty to forced labor, aggravated sexual abuse and traveling with intent to engage in illicit sexual conduct with a minor.  He faces a jail sentences of 12 years and 6 months.

Afolabi is the second member of the alleged ring to admit guilt. He has been in custody since 2007, when he was arrested with his ex-wife and her son, Dereck Hounakey, who pleaded guilty in March. A third man, Geoffry Kouevi, was convicted earlier this month of visa fraud in connection to the case.