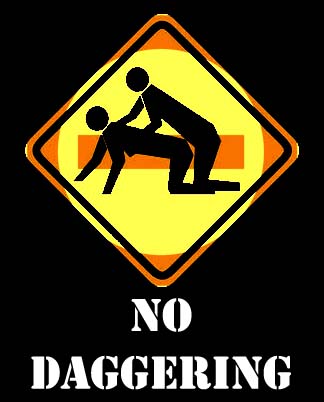 Representatives of some hospitals revealed that more men have been fracturing their penises in recent months than any other time in Jamaica.

Checks with urologists in some of the country's major hospitals have revealed that the “noticeable increase” in the number of cases where men fracture their members is largely attributed to the men's obsession with daggerin', aka rough sex.

While promising to send data regarding to the increase in the cases at a later date, one urologist from the Kingston Public Hospital (KPH) said he had treated, on average, some two cases of penile fracture each month, counting from December 2008.

“Almost every other week, since late last year, there is one case for this hospital.”

Another surgeon from that facility said the majority of cases that come to the hospital are a result of extremely vigorous sex or, in most recent popular terms, 'daggeration'.

“It's possibly daggerin' people tend to have a predisposition to rough sex,” the surgeon said.

“(So) during very rigorous intercourse, the penis slips out and in an attempt to ram it back in, the man hits the woman's pubic bone and pops the penis.”

The situation was no different when doctors from the western end of the island were contacted.

One specialist in the field told THE STAR that broken penises had been coming into the Cornwall Regional Hospital more than usual since the start of the year.

“There has been an increase here in the number of cases. Since the year started, I've seen about four. Usually, we would have like three cases quarterly,” the specialist said.

The doctors could not confirm if any of the cases regarding the broken penis took place when the men were doing the dance version of daggerin' as opposed to rough intercourse.

In a story published last September, Dr Alverston Bailey, a past president of the Medical Association of Jamaica, warned that men who suffered a penile fracture should immediately seek medical assistance as leaving it unattended might cause the penis to be permanently deformed or they might become impotent.

Bailey continued that when the penis was fractured there was a loud popping sound, followed by excruciating pain and significant swelling, causing the penis to appear deformed. He noted that in some cases, blood might be seen coming from the organ.