Chinese people must be laughing all the way to the bank at black people. They come to the United States and take all of our jobs, establish and own all of our business’ and community property, practice to outperform a number of our talents, and even study to learn our language, then play like they don’t understand it.

We often wonder when they converse amongst themselves if they’re talking about us like dogs – and we soon will learn that YES THEY ARE. 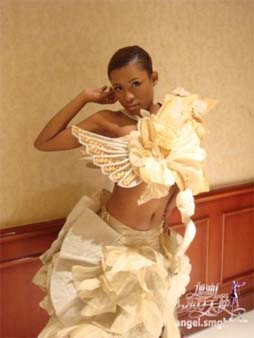 Take Lou Jing for instance, a bi-racial contestant in an Oriental fashion and talent show, who is currently the subject of harsh racial abuse from chinese netizens because her mother revealed that Lou was the result of an affair she had with an African American man while she was married.

Jing’s mother, who is a Shanghainese and known as Madam Lou, also revealed that her Chinese husband divorced her when he found their newborn looked African instead of Chinese.

After the affair, Madam Lou’s black lover returned to the United States, and she never heard from him again.