How the confession came about is unclear, but soon after Chinese people learned the truth about Lou Jing and her brown skin tone, they took to a Chinese forum on the internet and expressed outrage by posting a large number of racist comments. 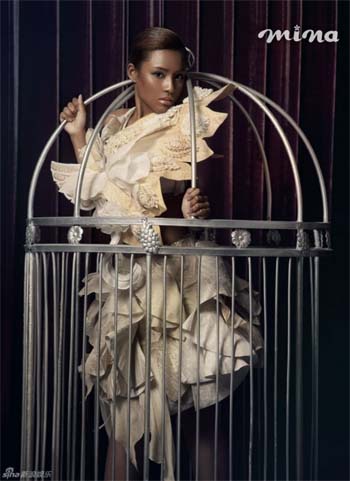 The comments were all typed in Chinese, but when translated to English by China Smack, it shows how Chinese people REALLY feel about black people, and dating outside their own race.

“Lou Jing, her mother a husband, and later, and one black extra-marital sex, and then gave birth to Lou Jing, after she was divorced after the birth. The End of the day that nigger ran back home in Africa. Can not imagine at that time that Shanghai men’re thrilled to see their excitement under the “daughter” is what black people feel. . . .”A few comments that followed:

“I cannot help but say, those coming out of mixing yellow and black blood are all truly ugly, a dirty feeling [appearance]…”“Fucked by a black. How come a zebra wasn’t born…?”“Ugh. Yellow people and black people mixed together is very gross…only black skin, not yellow skin, chocolate skin… Not even knowing this common knowledge, ruining a child’s life.”“How much self-respect could the child of a shameless old woman be? And she still wants to find her American father. Who knows if her father is in jail for being unable to repay his loans or dead from a gun fight on the streets. Judging by her mother’s story, it seems like her mother was not very familiar with her American black father anyway, so trying to find…America’s already has a bunch of black children trying to find their own biological fathers.” – more