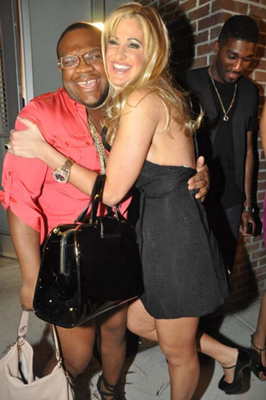 Rad Hourani, designer of slickly sharp clothes looks forward to fashion’s next phase and according to Elle magazine, the most buzzed about look on the runway… MEN IN HEELS. The male models during Rad Hourani’s Fall 2009 runway show wore the very same black high-heel ankle booties as the women. Hourani created the boots with himself in mind… he had been looking for a modern pair of man-friendly heels for years that weren’t cowboy boots.

This brings me back to sometime last year when hairstylist Derek J. (pictured here with Real Housewives of Atlanta, Kim Zolciak) stated in a confident tone that all men would soon be wearing high heels. Hummmmm… I can’t really imagine that, but maybe he knows something that the rest of us don’t.

“Derek J. began his career in Toledo, OH under the guidance of Vivian Keetion and Sherry McClain. From their training he learned how to manipulate current hair styles and produce new hair trends.

After mastering his craft, he decided to move to Atlanta to pursue a freelance career while furthering his education and training. Within his first year there he met individuals in the hair industry who exposed him to a different world of hairstyling instead of attempting to accomplish that feat from behind the salon chair. While being in Atlanta for only a short period he became key hair stylist for multiple music videos, photo shoots, and runway shows. He has also been a featured hairstylist on the cover of national publications, an image consultant to upcoming artist, and a nation platform artist for major hair care distributors.

While blossoming in his freelance career Derek J. wanted to take on the hair competition arena. After winning his first show entered he caught the competitive bug and went on to become one of the top hairstylists in the field. Derek’s greatest accomplishments came when he was asked to be Pantene Relaxed and Natural’s trend artist for 2006, and the driving force behind Shake and Go’s national ad campaigns.”

Watch Out Now….. as Derek J briefly struts his stuff in 6 inch stilettos during a competition interview with several of the Bronner Brothers Tears, Shears and Beauty contestants which aired on a BET J reality tv series last year. [see the video] [mashshare]