Derrion Albert: White House Speaks on Violence In The Hood

Interesting just as I built up the courage to comment on the tragic death of Derrion Albert, the Chicago teen who was beaten to death just by being at the wrong place at the wrong time, I come across an article which says the White House has an announcement to make on the chilling video which will be coming soon.

According the the AP, The White House says the cell phone video showing the fatal beating of a 16-year-old honors student in Chicago is “chilling.” It came up at President Barack Obama's morning meeting in the Oval Office.

White House spokesman Robert Gibbs on Wednesday said the video of teens viciously kicking and striking another teen with splintered railroad ties is among the most shocking anyone can see. He told reporters they should expect an announcement on an administration response to the “heinous crime” soon.

Gibbs says, though, that government cannot regulate what's in people's hearts. He says the White House believes such crimes call for community involvement.

Maybe the hood community centers can get some bail out money?  The only question is, if that were to happen would it be used for all the right reasons?  Maybe, and maybe not.

A question the singersroom.com had was: Is The Black Community Worshipping A Thug?

The question came about because they wondered if what a commenter wrote on the case of Derrion Albert was an accurate assessment.

The death of Derrion Albert..more fruit from the tree of thug worship.


Jay Z, a professed former crack dealer was on Oprah last week. Snoop Dogg is a cultural icon. Tupac is an iconic figure. Need I mention, 50 Cent, the Game, and the whole plethora of drug dealers, rapists, burglars, and other felons that black America worships. Young black boys want to be them… Old black men want to reclaim their youth by sagging by them…
Young black women, educated and non educated, want to F them and have babies by them.. Older black women consider them to be “real men”

First of all, many of the commenters on Black Voices are white impersonators.  At-least that's my observation.  Secondly, just as I commented there I think the assessment is completely wrong. Derrion Albert’s death had nothing to do with rappers rapping about nonsense, it had more to do with the lack of community resources available to keep kids off the streets and involved in more positive and affordable activities (particularly for teens). Sure people can blame whoever they want based on their own “opinions,” but facts are facts. 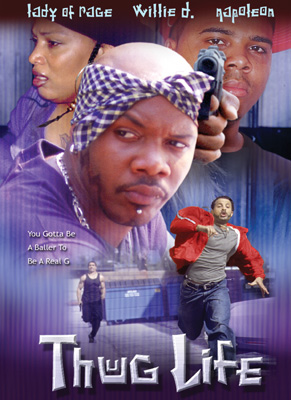 I don’t think any of our boys inspire to be thugs like rappers once USE TO BE, they inspire to be somebody and possibly WHERE THESE RAPPERS ARE TODAY financially. The problem is they don’t know how to go about it which has a lot to do with the fact that it’s not as “easy” as it once was to get into that game, but still they TRY.

I can agree that many rappers send wrong messages to our youth who still haven’t developed in the mind, but I don’t feel that the violence on the streets stems solely from rappers and their messages. Not at all.  Rappers are only telling a story.  The majority of them fictional at that.  They have books that tell the same stories.  Does that mean if our youth were to read a book it's gonna result in violent crime?  Get real.

Violence on the streets in my opinion stems from bad economic times, it stems from racism and built up anger inside and the fact that black people are disadvantaged, it stems from peer pressures in struggling black communities where once again there’s absolutely nothing for these kids to do besides hang out in the streets. Sure one can blame parents without looking at the picture as a whole, but the bottom line is the only way violence on the streets is going to stop is if we tackle ALL of our issues and come together as a people rather than pointing the finger at one another. When all the while we still have others working hard AGAINST our gains.

All the bashers and accusers would be surprised to learn than many of these kids are crying out for help. The question is what is the solution? WHERE are the answers? WHO has the answers? We all not crazy, but the first thing the white man wanna do is throw you in a mental facility…. or JAIL by thinking of all ways they can to make things worse instead of better.

So many people are quick to blame hip hop for all the problems going on in our community, and personally I think that's silly.  Black communities have been having problems long before hip hop ever came about.  We can date it back as far as the beginning of time.  Things only got a little better but many things remains the same.  Some things have gotten worse.