Documentary To Confirm Cleopatra Was A Black Woman 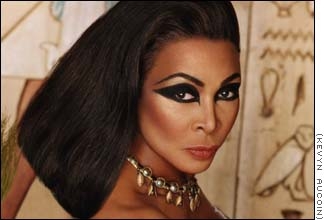 Not long ago I wrote an article about how ridiculous and entertaining it was to research the ethnicity of Cleopatra just to find people bickering back and forth about what they thought she could be [check it out].  Many just refuse to acknowledge that she may very well be of African heritage (which would make her black.)

My take on it is that because she is considered a beauty icon, many individuals would die before accepting the fact that a black person is one of the most beautiful person in history.

Well, this month they may very well be in for a rude awakening.

According to new findings, Cleopatra may have been part African and not Greek Caucasian, and the findings are being brought on to a British TV documentary to be shown this month, its makers said Sunday.

It has long been thought that the former Queen of Egypt's roots were in Greece, but the discovery of what experts believe are her sister's remains has revealed that the siblings had a part-African heritage.

The BBC documentary “Cleopatra: Portrait of a Killer” to be shown on March 23 shows the analysis of the discovery of human remains in a tomb in Ephesus, Turkey.

Using state-of-the-art facial reconstruction and forensic techniques with anthropological and architectural analysis of the tomb, the experts are convinced that the skeleton is the remains of Cleopatra's sister, Princess Arsinoe, who was murdered on Cleopatra's orders.

Archaeologist Hilke Thuer from the Austrian Academy of Science, who led the team, said: “The results of the forensic examination and the fact that the facial reconstruction shows that Arsinoe had an African mother is a real sensation which leads to a new insight on Cleopatra's family and the relationship of the sisters Cleopatra and Arsinoe.”