It looks as if Katherine Jackson and the rest of the Jackson's family wishes were granted today, when Dr. Conrad Murray received the maximum time allowed for his role in the death of Michael Jackson. 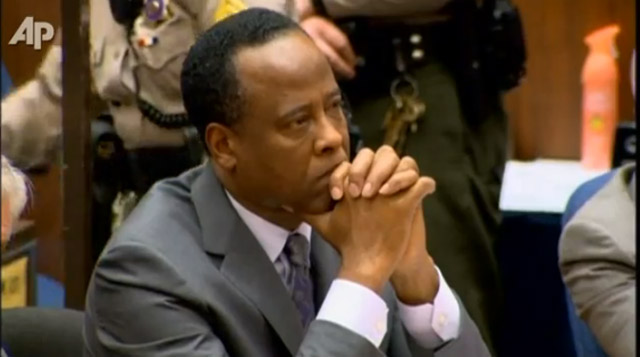 Murray, was sentenced Tuesday (Nov. 29) by Superior Court Judge Michael Pastor, to four years, which is “the high term imprisonment” for his conviction of involuntary manslaughter.

Murray (shown above) looked on in a state of rage, as Judge Pastor explained his reasoning for his decision to throw the book at Murray, rather than grant him probation.

“I do so because I find that Dr. Murray abandoned his patient who was trusting him,” said Judge Pastor. “His patient was vulnerable under those circumstances, having been administered potentially dangerous drugs by his medical provider. Dr. Murray's conduct extended over a period of time. Dr. Murray repeatedly lied, engaged in deceitful misconduct, and endeavored to cover-up his transgressions. He violated the trust of the medical community, of his colleagues, and of his patient, and he has ABSOLUTELY no sense of remorse; absolutely no sense of fault, and IS and remains… dangerous!”