Drama In The Hood: Mom Intervenes During Teenage Girl Fight 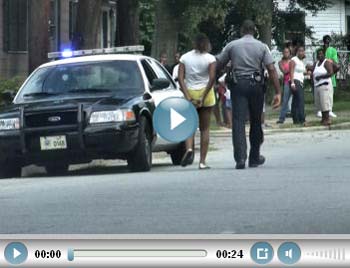 Anybody living in the hood knows that it's not easy.  Not just for kids who are constantly exposed to and surrounded by bad influences, but also for young, single parents just trying to survive.

When Public Safety Officers responded to a fight at Sims and Water Streets, they found a group of girls on each side of the street yelling and fussing with each other, with more people along the street watching the event.

Cpl. Aaron Brown spoke with a 14 and 15 year old who stated they were walking to meet Sonja Smart who was coming from the store and the Jones girl came off the porch and started calling them names and talking about their hair.

An 11 year old stated she was going to meet her mother, Sonja Smart, and a girl hit her for no reason at all.  Then the fight was on.  Sonja Smart, 32, stated she ran up to the other girls and was pulling them off her baby girl.

On the other side of the street, a 12, 13, 14 and 16 year old had a different story.  They stated that the girl came into their yard and accused them of talking about them.  The response was “We ain't saying nothing about yall” and everybody began arguing and yelling.  They stated that is when 32 year old Sonja Smart grabbed a girl by the hair and dragged her into the road.  That's when we jumped in to help.”

The question here is, what would you do if your child was being jumped? Probably exactly what Sonja Smart did… right?  I can't think of any parent that would just stand there and watch their child get beat up by several ruthless people no matter what the ages were.

After officers took Sonja Smart and all the juveniles involved down to the station, about a dozen, a call was made to Juvenile Justice who stated to release the juveniles to their parents.

It all didn't end there, because when one parent gets involved, there are other parents that are called into play that are just as ignorant as their children.  Hell, that's where they get it from.

Gayle Jones walked out cursing and threatening to the effect of “this shxx isn't over with, i'm going to get that bxxch for touching my child, an adult aint got no business touching my child.”  Gayle continued to rant and rave talking on a cell phone…. When Gayle refused to calm down, Captain Bunting placed handcuffs on her, and after several ugly comments from her, began moving her to the booking room.

Gayle's juvenile daughter saw this and threw her potato chips in the air and came at Captain Bunting with clinched hands raised in the air as to strike at him.  She was yelling “You take your hands off my momma, you don't touch my momma.”

All the other parents were cooperative and without causing a scene took their children home.