Drunk As A Skunk: http://www.myspace.com/dejaelizabeth77

Her license plate said “TROUBLE” and Elizabeth Ann Kommes apparently meant it. The 30-year-old Michigan woman allegedly offered a Wisconsin Dells police officer sexual favors and $10,000 to get out of a drunken driving ticket. 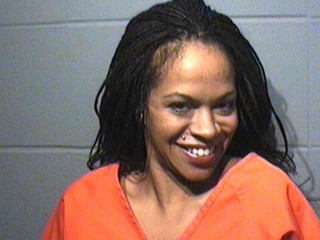 According to the police report, bystanders told police las Friday that around 10 p.m. an intoxicated woman “stumbled into a vehicle” with vanity plates that read “TROUBLE” in a parking lot directly across the street from the police station.

Police pulled Kommes over shortly afterward, and she admitted that she had been driving drunk, according to the complaint. In the squad car Kommes allegedly pleaded with the officer that she not be arrested and offered him $10,000 and sexual favors to let her go.

“Its not common practice that we get a lot of bribes here,” Anderson said. “In my thirty years it's only happened to me once.” Anderson was once offered a monetary bribe from a young man trying to get out of speeding ticket, which he declined.

But Kommes is no stranger to the law. Police say she was convicted of drunken driving in Wisconsin in 2000, 2001, and 2006, and then again in Michigan in 2007. Her driver's license was revoked in 2006, according to the complaint.

The complaint also stated that Kommes told the officers she was on probation in Michigan for possessing three pounds of marijuana and that she was concerned that another arrest would land her in jail for violating her probation.

Phone calls to Kommes were not immediately returned and it is not known at this time whether she has sought an attorney. She is due in court August 25 for charges of drunken driving as a fifth offense, bribing a public official, and driving with a revoked license.

Despite having her offer declined, Kommes didn't appear to remain upset for long. She posed and flashed a big smile for her mug shot while being booked at the Columbia County jail — a fact that seemed to embarrass one jail official who spoke about the matter.