Environmentalist Claim Water At The Jordan River is Not Healthy

People come from all over the world to be baptized in the Jordan River, where the Bible says John the Baptist baptized Jesus. However, concerns about pollution and water quality as of late have prompted an environmental advocacy group to call for the banning of baptisms until the water is safe.

“We've known for a long time that these waters are not healthy,” Friends of the Earth's Gidon Bromberg told Reuters. “For most of the year they are four times more polluted than Israeli standards would permit.

But Israel officials deny the water is unsafe, and claim water tests recently released prove there's no need for concern.

“There's absolutely no problem with the quality of the water. People can come and baptize here as much as they want, I guarantee it,” said Eli Dror of Israel's Nature and Parks Authority. (read more)

Water pollution in the Jordan River is a big deal; not only because people bath and baptize in the water, but also because the river ends in the Dead Sea. It's estimated the volume of water brought to the Dead Sea by the Jordan is on the average, 883 cubic feet per second. 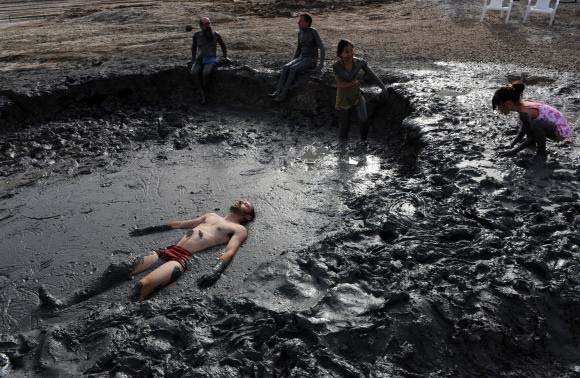 An Israeli enjoys unseasonably warm weather by immersing in black mud at Mineral Beach on the Dead Sea, the lowest place on earth, February 13, 2010. People flock to the Dead Sea to enjoy the therapeutic value of the mud and salt water. Photo: UPI/Debbie Hill

FACT: The Dead Sea itself contains the highest concentration of minerals in the world, and is used in a variety of skin care products. It's said that mud from the Dead Sea can take 10 years off your skin, and because of this, the Dead Sea is believed to be the fountain of youth.

However, if the water is dirty and polluted, then skin care products made with Dead Sea minerals can't be any good. So, let's hope they get the problem (if there is one) fixed, because I'm personally a fan of Dead Sea mud.