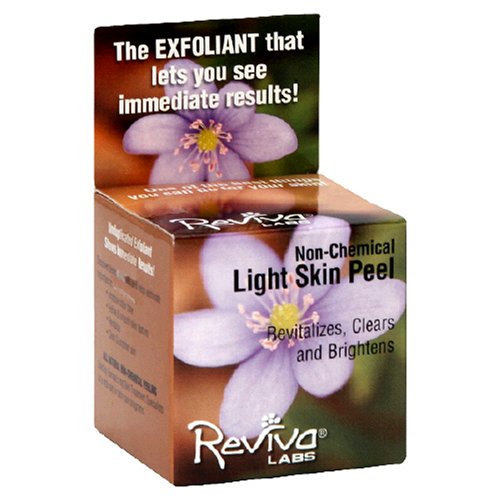 What’s exfoliation? It’s the removal of dead, flaky skin cells from the surface of the skin. Every day, new cells form in the bottom layer of the epidermis and reach the skin surface in about 30 days.

During the journey, the cells loose moisture and at the surface becomes dry, hardened flakes.

Info For People of Color

But for the skin of people of color, cell production and the accumulation of dead cells speed up and can build up. Dead cell build-up is a frequent reason for the “ashy” look sometimes seen on ethnic skin.

Reviva Labs of Haddonfield, NJ was one of the founders of exfoliation in America with their all natural “Light Skin Peel” exfoliation over 35 years ago. And today, skin-care professionals still acclaim Reviva’s Peel as “probably the safest, most effective exfoliant available and one that delivers immediate results.”

Shari Franklin, a professional model and instructor, discovered Light Skin Peel recently and became so impressed with the benefits to her, she became a Reviva spokesperson.

“I also didn’t wear make-up for a week, just so I could really see the difference.”

Ms. Franklin continued, “When my mom complimented my face and asked what I’ve been using, I was more than happy to tell her my discovery!

“I explained to her that I use Reviva’s Light Skin Peel twice a week, after regular cleansing with Reviva’s Cleansing Gel and Camphor Lotion. My mom said she wanted to try Reviva so I got her started with a regular skin care treatment regime from Reviva.

“My mom gets compliments on her skin. Looks 'brighter and younger,' people tell her.”

Ms. Franklin’s use of Reviva is especially beneficial, for she deals with the public, face-to-face, as part of her job.

A former flight attendant, she has been a professional print and TV model since the age of eight. Her face has been featured in national magazines for Joy Dish Detergent, Hostess Twinkies and others.

Stephen Strassler, founder of Reviva Labs and one of America’s earliest Aestheticians, added details on exfoliation and light skin peel.

“When dead cells are removed from African-American and other people of color facial skins, just once a week, by using light skin peel, the skin tone shows greater clarity and a softer, 'polished' complexion.”

“Removing dead skin cells prevents clogging of pores which cause blackheads or breakouts. And peel discards facial impurities along with the dead skin cells.”

He continues “What’s more, dead cells can block the absorption of other skin treatment products, so Light Peel opens the way for subsequent skin creams to be more effective.”

Reviva’s Peel features papaya, crushed almond, salicylic acid and soothing ingredients like chamomile and allantoin to make the rub-off gentle and non-irritating. (After 3-5 minutes, you rub-off Peel granules with dry towel or fingers).