Fashion At A Troubled High School 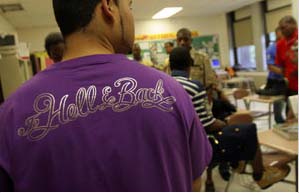 CAMDEN, N.J. — Notable happenings at Camden High School this year included a cafeteria brawl that led to the arrest of 18 teenagers and left a police officer with a bruised face, a 14-year-old boy smuggling a gun loaded with hollow-point bullets into school in his backpack, the replacement of a principal and a hip-hop fashion show that turned the auditorium into a South Jersey version of a Bryant Park tent.

For the students of this troubled high school, the fashion show was the rarest of the events.

The brainchild of the founders of the Parish Nation clothing label, the show was seen as a way to engage often-neglected teenagers while spreading the word about their brand. They helped stage a show at a school in Yonkers before setting their sights on Camden, a damaged city in southern New Jersey where a sign off the highway seems to taunt visitors: “Philly’s More Fun.”

At first, many of Camden’s students and a few teachers were cool to the idea. How could a school with meager resources mount a glamorous fashion show in just a few weeks? How would the models be selected? Was Parish Nation just using the students to promote its clothes?