Fired Worker Sheds Light on Snapple/Dr. Pepper and The KKK 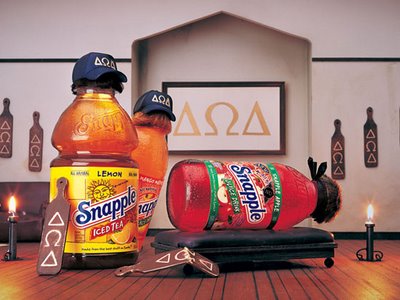 Claims of Snapple being owned and operated by the KKK have been going around for quite a long time with some uncertainty on how true they were.  But now — either the truth is soon to unfold or somebody is just a VERY unhappy camper.

A fired worker at Snapple/Dr Pepper Corp. in Northlake has filed a lawsuit in federal court, alleging racial discrimination.

Isael Johnson filed suit against the company on April 17 after being fired on April 10 from a warehouse job.

Johnson, who is African-American, said that a white co-worker wore a “Ku Klux Klan hat made of printing paper” in early March, according to court documents.

Johnson also claims that the warehouse supervisor called the African-American workers “boys” and one called Johnson a “bitch.”

Johnson said he was terminated even though he had the third most seniority in his position of bulk picker, having been employed since 2000.

He is suing for lost wages, legal fees and damages.

A spokesman for Snapple/Dr Pepper headquarters in Plano, Texas, said the company did not comment on pending litigation.