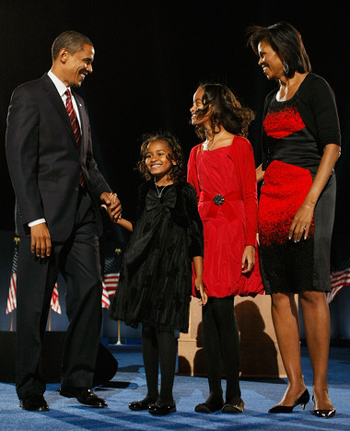 It has now been confirmed that Sasha was wearing a $72 black babydoll dress by Gerson & Gerson, Inc. and Malia was wearing a $110 red bubble-hemmed silk taffeta dress made by high-end kid's brand Biscotti Inc. The full name of the item is the Biscotti Girls Precious Jewels Christmas Party Dress with Bubble Hem.

“Stores are going crazy all over it,” says Carrie Martin, spokesperson for the Oakland, Calif., label, which plans to put out a press release noting that Malia wore its $110 bubble-hemmed dress on election night. Unfortunately for the label, whose $50 to $120 girls’ dresses are sold by retailers such as Neiman Marcus, it had sold out of the style well before Tuesday. “It would have been nice to get some sales out of it,” says Bernadette Reiss, co-owner of Biscotti. At Neiman Marcus, which sells the dress online, spokeswoman Ginger Reeder says the Web site “saw a blip” in sales of the piece yesterday.

Retailers who tried to order Malia’s dress say they believe that the influence Mrs. Obama has had on fashion will also apply to her daughters. “She has such a sense of style. I think people are going to try to emulate that whether it’s on her children or herself,” says Bette Esposito, co-owner of Denim & Daisies in Boonton, N.J., who carries the dress and tried unsuccessfully to order more pieces on Wednesday. Ms. Esposito, whose store also sells online, says she plans to send out an email blast to customers noting that she carries the dress Malia wore. She also plans to display it in her shop window with a newspaper clipping of the new First Family.

Biscotti’s Ms. Reiss says she wasn’t sure at first if it was the same dress because Malia wore it with a different belt. She adds that she was pleasantly surprised to see it on Malia because she hadn’t known that the Obamas had bought it. (Mrs. Obama’s spokeswoman said the dress was purchased at a Nordstrom.)

Citing cost as a factor, Ms. Reiss says she doesn’t plan to recut the dress. Instead, she’s hoping to dress both Malia and her sister, Sasha Obama, for the presidential inauguration. “We would be so honored,” says Ms. Reiss, who already plans to reach out and offer style assistance to the Obama daughters.