This photo of French supermodel Noemi Lenoir, taken one week before her failed attempt to allegedly commit suicide back in May 2010, has finally emerged. The shot will be featured in 3this month’s issue of V Magazine. 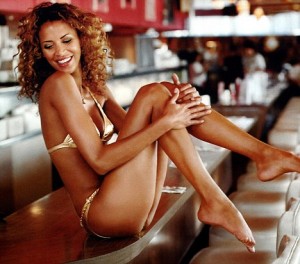 Lenoir, who is the face of GAP and Victoria’s Secret, is best known in the states as the leading lady in Usher’s music video for his song “Hey Daddy.”

According to the Daily Mail, friends of Lenoir said her turmoil involved her relationship with multi-millionaire Carl Hirschmann, who is involved in a sex and extortion scandal in Switzerland.

But other reports said she is still very much involved with her former boyfriend, ex-Chelsea star Claude Makelele, the father of her five-year-old son Kelyan, and claimed that she tried to take her own life after the footballer dumped her for the third time.