Girls Growing Up Too Fast. Who’s To Blame? 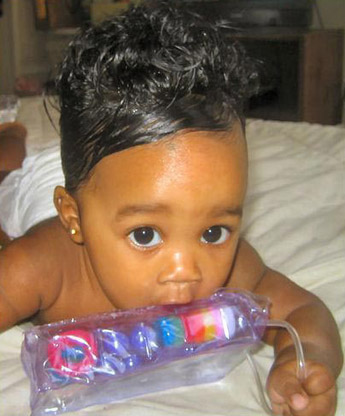 I’ll have to admit, being a hairstylist and having always had a strong passion for doing hair, I may have been one to play around like this with my daughters hair (if I had one). I may have even snapped a quick photo. You have to admit the picture is extremely cute.

However, in my humble opinion this hairstyle is far to old for a baby girl. It doesn’t even become her.

Twisted pony tails with barretts, knockers, ribbons and even braids would make her look much more like a top model that knows how to go with the flow.

Just what is considered growing up too fast? And who is to blame?

We already know that girls mature much faster than boys, as if that weren’t enough to make a mother lose her mind. And it use to be where girls as young as 12-13 dabbled in make-up and sported high heel shoes, which I always thought was doing too much.

These days they’re starting even younger.

According to a recent article posted in a Philadelphia Magazine, did you know that girls as young 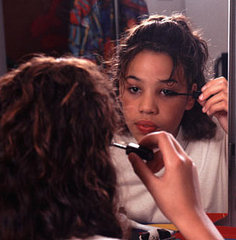 I would be quick to ask, just who are these children’s parents and why on earth are they allowing their daughters to grow up so fast? But as another blogger pointed out, while it’s easy to just blame these girls’ mothers and/or fathers, it’s just as troubling that spa owners allow these unnecessary (and sometimes painful) procedures to be performed on children just for the sake of bringing in more income.

AN EVEN BIGGER QUESTION

For the young girls who progress from toddlers to teens and wind up roaming streets and getting caught up from wearing revealing clothing and high heel shoes resulting in having babies before their time, who’s to blame? Is it the parents for allowing their daughters to wear what they want including makeup? Is it the salons and the spas who provide services and don’t take into consideration age over preference? Or do we blame the men that take advantage of underage girls?

Shown to the left is one of the latest ad campaigns for Beyonce Knowles House of Dereon kids collection. The line addition is for the very young consumers and is branded Dereon Baby.