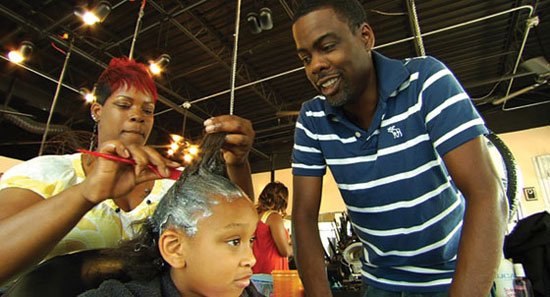 As a stylist and a strong black woman with high self esteem and much disregard to what people think of my partake in what I choose to do to participate in the world of “beauty”, I’ve learned a long time ago from education and experience that “Good Hair” is definitely healthy hair and “Bad Hair” is hair that has been damaged in some form or fashion. I will take those simple descriptions with me to my grave not believing anything different.

But of course, people will always use the terms loosely rather than look at them from a technical view.

Hours after President Barack Obama’s inauguration, Rock sat down to talk about his Sundance Film Fest entry, “Good Hair,” a hilarious examination of the cultural pressures that prod blacks into costly, often painful methods to care for their hair.
The idea first hit Rock in the mid-1990s on a standup tour through Atlanta, where he came across the Bronner brothers hair show, a glitzy convention for black stylists.

“I thought, wow, this would make a great movie, but that was like 15 years ago, and no one was making funny documentaries 15 years ago,” Rock said in an interview Tuesday alongside Nia Long, one of many actresses and other celebrities Rock interviews in the film.

“So you cut to now, and I have daughters, and I’m really dealing with them and their hair a lot, and my friends have daughters, and we talk about our daughters’ hair issues. I kind of saw where to go at it, and now people are making funny documentaries,” he said.

“Good Hair,” one of 16 films in Sundance’s U.S. documentary competition, follows Rock from the Bronner brothers show to neighborhood salons, businesses dealing in hair-care products and the streets of India, where human hair is a huge export industry for hair weaves.

But Rock said Sundance crowds have given “Good Hair” an enthusiastic reception, bolstering his hopes that it can find a broad audience. Produced by HBO, “Good Hair” eventually will air on the cable channel, but Rock and his collaborators are considering a theatrical release first.

“It’s this whole thing about approval. That approval is not simply, `I want white people to love me.’ It’s like, `I need a job. I want to move forward, and if I have a hairstyle that is somewhat intimidating, that’s going to stop me from moving forward,'” said Nelson George, executive producer of “Good Hair.”

Rock interviews women who undergo hair-relaxing treatments with chemicals that burn their scalps and others who pay thousands of dollars for hair weaves. Along the way, he trades witty, insightful observations with such figures as Maya Angelou, the Rev. Al Sharpton, actresses Raven-Symone and Tracie Thoms, and singers Eve and Ice-T.

Long talks candidly in the film about her own perms and weaves, but in the interview with Rock, she also speaks hopefully about how Obama, his wife and their two daughters can help blacks overcome the cultural inferiority complex that prompts them to change their hair.

“Just seeing that family photo and seeing the daughters with their hair in cornrows sometimes, it resonates for me in such a huge way,” Long said. “I just feel finally we have an image that’s the most powerful image in our country that actually is a part of who I am.”

Rock also reveled in Obama’s inauguration, but he joked about another hurdle still facing blacks.

“Excellent black people have always been compensated for excellence. Always,” Rock said. “The real equality is when we can have a black president as dumb as George Bush. That’s when we’re really equal. That’s when the dream has come true.”