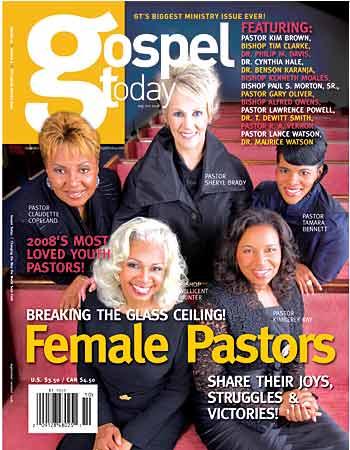 Gospel Today, the Fayetteville-published magazine, was pulled off the racks by the bookstores’ owner, the Southern Baptist Convention. The problem? The five smiling women on the cover are women of the cloth — church pastors.

The group says women pastors go against its beliefs, according to its interpretation of the New Testament. The magazine was taken off stands in more than 100 Lifeway Christian Bookstores across the country, including six in metro Atlanta.

Published for nearly 20 years, Gospel Today is the largest and most widely distributed urban Christian publication in the country, with a circulation of 240,000. The magazine's publisher, Teresa Hairston, said she was just reporting on a trend, not trying to promote women pastors.

“They basically treated it like pornography and put it behind the counter,” she said. “Unless a person goes into the store and asks for it, they won't see it displayed.”

“It’s really kind of sad when you have people like [Gov.] Sarah Palin and [Sen.] Hillary Clinton providing encouragement and being role models for women around the world that we have such a divergent opinion about women who are able to be leaders in the church,” Hairston said. “I was pretty shocked.”

Nationally, the Southern Baptists have adopted statements discouraging women from being pastors, but their 42,000 U.S. churches are independent and a few have selected women to lead their congregations. The faith was organized in 1845 in Augusta, Ga.

Chris Turner, a spokesman for Lifeway Resources, said the cover was not the reason the magazine was pulled from Lifeway's shelves.

“The buyers said the statements that were in it took positions that were contrary to what we would say,” Turner said. “It wasn't so much that there were women on the cover.”

Featured on the cover are Pastor Sheryl Brady of The River in Durham, N.C.; Pastor Tamara Bennett of This Is Pentecost Ministries in Sacramento, Calif.; Bishop Millicent Hunter of The Baptist Worship Center in Philadelphia, Pa.; Pastor Claudette Copeland of New Creation Christian Fellowship in San Antonio, Texas; and Pastor Kimberly Ray of Church on the Rock in Matteson, Ill.

Bennett said the issue of women in the ministry is not one that should be shelved.“It's a story that needs to be told,” she said in a telephone interview Friday. “Sometimes we forget that ministry is God's business. It's not a man's business. God gives gifts to whomever he sees fit.”

Bennett said she is encouraging people to ask for the magazine.