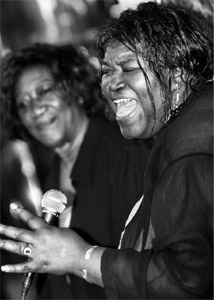 Funny how you can find some of the most talented people performing in the streets just trying to make a living.  Here in San Francisco they appear all over downtown Market street, and Fisherman's Wharf.  Apparently in New York, one lovely lady has claimed her spot, and made a name for herself at the local subway station.

She may look very familiar to you, and if so, that's because her daughter, Gabourey Sidibe is all over the place right now as the 'Precious' newcomer to Hollywood film.  That's right.  Who would have ever guessed a local subway singer's daughter would be the next big thing on the Hollywood's big screen?

The following video shows Gabby's mother, Alice Tan Ridley practicing with a church choir, but on an average day in the life she can be found entertaining people at the subway station by performing smooth R&B music in exchange for cash tips.  It all may look funny, and maybe even seem a little homeless, but in my experience, I've learned, never to judge a person by what they do.  You really never know who they are, where they come from, or where they're going for that matter.

With Ridley's daughter recently becoming an overnight sensation, I would imagine her days singing in the subway's just might be over.  I feel big things coming for this family.  It seems as if Gabby and her mom have a real good story to tell.