Statistics show when it comes to health, black women and the price we pay to maintain our hair continues to stand in the way. Furthermore, Chicago public health officials and local stylists suggest the reason black and ethnic women don’t exercise as often as they should is because they are more in tuned with their hair than they are with their health. A recent survey confirmed that 30% of women use hair management as their top reason for not working out.

It seems not much has changed over the years being that past studies have revealed almost exact same results. A study conducted by the Wake Forest University Baptist Medical Center, in Winston-Salem, N.C., suggested that 31% out of 103 African-American women surveyed said they exercise less because it might harm their hairstyles, according to a study released in November, 2007. All the women agreed that exercise is important but fewer than a quarter actually met the federal Center for Disease Control and Prevention’s recommended exercise rates. 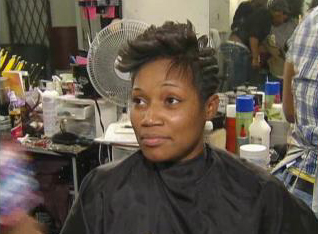 Few women would head straight to the gym from the hair salon, but the hair dilemma appears to be especially knotty for African-American women because they tend to spend a disproportionate amount of time on professional hair care, said Shani Smith, a fourth-year medical student at Wake Forest who worked on the study.

The problem is raised to the level of a public health issue because as a group African-American women are in greater need of exercise. Seventy-eight percent of black women are overweight and 50 percent can be categorized as obese, according to the American Obesity Association.

“All women are probably concerned about their hair, but it is more pronounced among African-American women because they are trying to maintain hairstyles that are not natural,” said Kimberly Garrison, a fitness expert and columnist for the Philadelphia Daily News. “Black women’s hair is more delicate, even though it is coarser, because the chemicals they often use to make it look ‘anglo’ breaks their hair down,” Garrison said.

In the late 1990s, researchers at a health initiative for young black women run by Harvard University also discovered the hair dilemma. Their answer was “Hair Care Tips for Sisters on the Move,” a pamphlet that offered advice for maintaining both a healthy lifestyle and hairstyle.

“We found that the pamphlet was extraordinarily well received,” said Rima Rudd, a senior lecturer at the Harvard School of Public Health and a principal investigator for the program. “Women reported not so much that they learned something new, but that a silence had been broken. It was a good vehicle for talking about the issue.” 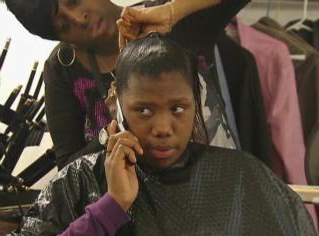 The pamphlet was distributed at health and fitness centers in the Boston area and got many African American women to start moving, Rudd said. And although the Harvard program ended several years ago, the pamphlet can still be downloaded online.

Note: You can also try wearing a cotton head band. This will absorb sweat while working out.