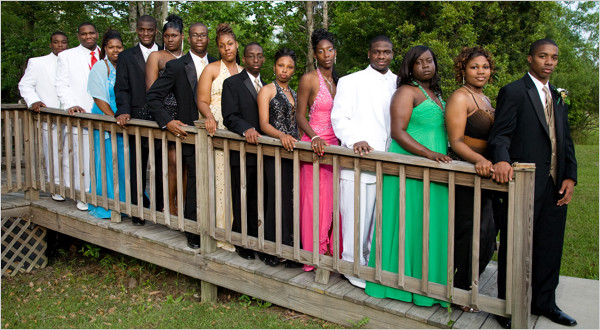 From The New York Times: Racially segregated proms have been held in Montgomery County where about two-thirds of the population is white almost every year since its schools were integrated in 1971. Such proms are, by many accounts, longstanding traditions in towns across the rural South, though in recent years a number of communities have successfully pushed for change.

Watch audio slide show where students (one black and one white) voice their opinions on the segregation and “tradition.”

The most bothering about this whole thing is the fact that many of the parents feel the way the school segregates the prom is fine the way it is — so why should they work to change anything?

When the actor Morgan Freeman offered to pay for last year’s first-of-its-kind integrated prom at Charleston High School in Mississippi, his home state, the idea was quickly embraced by students and rejected by a group of white parents, who held a competing “private” prom. (The effort is the subject of a documentary, “Prom Night in Mississippi,” which will be shown on HBO in July.) The senior proms held by Montgomery County High School students referred to by many students as “the black-folks prom” and “the white-folks prom” are organized outside school through student committees with the help of parents. All students are welcome at the black prom, though generally few if any white students show up. The white prom, students say, remains governed by a largely unspoken set of rules about who may come. Black members of the student council say they have asked school administrators about holding a single school-sponsored prom, but that, along with efforts to collaborate with white prom planners, has failed. According to Timothy Wiggs, the outgoing student council president and one of 21 black students graduating this year, “We just never get anywhere with it.” Principal Luke Smith says the school has no plans to sponsor a prom, noting that when it did so in 1995, attendance was poor.