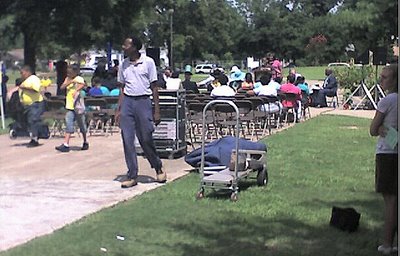 More than a century ago, two Houston pastors and a local political leader — each of them former slaves — raised $800 to buy 10 acres of what would ultimately become the first park in Texas and the only city park open to blacks for more than 20 years.

The park, which is among Houston’s historically protected landmarks, first opened in 1872 when pastors Jack Yates and Elias Dibble and political leader Richard Allen raised $800 to acquire the land at an interest rate 6 percent higher than white citizens were charged, Ellis said.

The park was the site of Houston’s first Juneteenth celebration and was donated to the city in 1916. When Houston segregated its parks in 1922, Emancipation Park was the only facility open to blacks.

So far, the Friends of Emancipation Park Board has only about $2,000 in hand. But they have scheduled a string of events next month to raise awareness about their fundraising drive.

Ellis said she and fellow board member Dorcaus Robinson have visited “freedom parks” along the underground railroad route in Toronto, Detroit, Battle Creek, Mich., and Memphis to inspire their vision. “We truly believe we ought to be able to do something as grand as what those communities have done,” Ellis said.