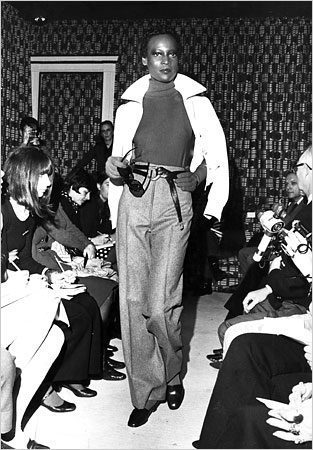 Naomi Sims, whose appearance as the first black model on the cover of Ladies’ Home Journal in November 1968 was a consummate moment of the Black is Beautiful movement, and who went on to design successful collections of wigs and cosmetics for black women under her name, died from cancer this past Saturday, reports The New York Times. She was 61.

Naomi Sims, was one of the top African-American businesswomen in the United States.  She began her career as the first black supermodel, and according to Essence magazine, “Never had a model so dark-skinned received so much exposure, praise, and professional prestige.”

After just five years, Sims decided to give up modeling to start her own wig business. Sims continued to expand her business interests in the 1980s, launching her own perfume and a line of prestige cosmetics. As founder and CEO of the Naomi Sims Collection, she oversaw a multimillion-dollar range of wigs, skin care products, and cosmetics specifically designed for black women.

“There is nothing sadder than an old, broke model, and there are many models who have nothing at the end of their career,” Ms. Sims told The Times in 1969.

Ms. Sims often attributed her success to using her race as an advantage.

“It’s ‘in’ to use me,” she said early on, “and maybe some people do it when they don’t really like me. But even if they are prejudiced, they have to be tactful if they want a good picture.”