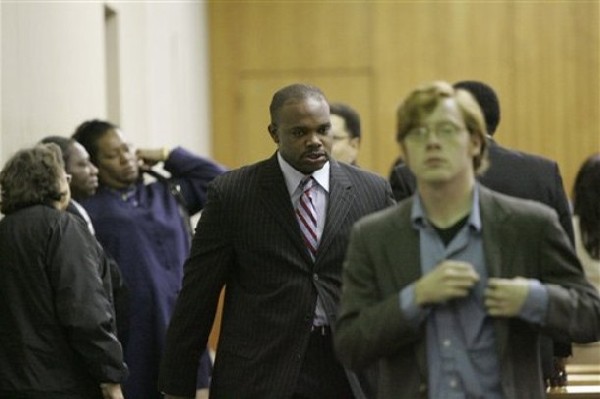 Atlanta police are looking for the person who killed the son-in-law of the late singer James Brown.

Darren “Chip” Lumar was killed Wednesday night in the garage of his Buckhead home. Sources close to the case and family members told CBS 46’s Tony Mcnary they believe the killing was a hit.

“I heard three gun shots, pow pow pow, really quickly and I jumped up,” said neighbor Michael Bang. “We ran down here and we saw gun shells on the ground and blood and we saw our neighbor drive off.”

Investigators said the shooter was waiting for Lumar.

“When he drove up to park his car in the garage, he was confronted. An altercation of some sort took place. That’s when the victim was shot multiple times,” said Atlanta police Officer Eric Schwartz.

The neighborhood where Lumar lived is a gated community.

“I think it was somebody that knew him,” Schwartz said.

Witnesses said after the gunman shot Lumar, it appeared the gunman was side-stepping away, as if he was looking to see if anyone was watching him. The witnesses said he then rounded a corner, possibly jumping a fence, and got into a car that was waiting for him.

The witnesses said Lumar then got into a car and drove four miles to Northside Hospital, where he died.

CBS 46 talked with Lumar in January, 2007, only weeks after James Brown died on Christmas Day, 2006. Lumar said he felt his father-in-law's death was suspicious.

“There's not a bone in my body that believes my father-in-law died from congestive heart failure,” Lumar said.

Lumar questioned Brown's death because there was no autopsy. Lumar was married to Brown's daughter, Yamma Brown Lumar, who had recently divorced him.

Sources close to the family and the case told CBS 46 that when Lumar arrived at the hospital, he had $4,000 in cash in his pocket.

Police said Monday they have not made any arrests and they don't have a motive.