Hope for Haiti Telethon plus Life In Haiti Before the Quake

In response to the devastating earthquake that hit Haiti, Wyclef Jean will join George Clooney and CNN's Anderson Cooper in hosting MTV Networks' “Hope for Haiti,” global telethon to raise funds for the fallen Carribean Island of Port-au-Prince.

The telethon will be hosted by Clooney in Los Angeles, Jean in New York and Cooper in Haiti, and will air commercial-free across ABC, CBS, NBC, FOX, CNN, BET, the CW, HBO, MTV, VH1 and CMT on Friday, January 22, at 8 p.m. ET/PT.

Even during times of crisis, a woman's gotta comb her hair 🙂 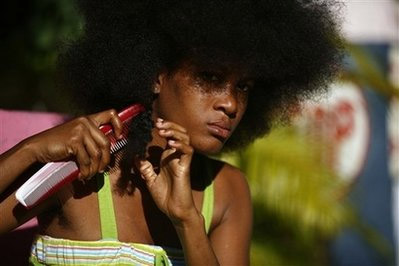 The following video is a glimps at what Haiti USE TO be. While watching it, you will see just how much Haiti was in need long before the 7.0 earthquake occurred just 6 days ago. The documentary is broken into 10 small parts. Part 1 is showing below, and the rest you can view here.