Marijuana (THC) May Be The Secret Key to Beautiful Skin

Marijuana doesn’t just grow on trees and get you high. In a recent study, researchers discovered the human body produces compounds that resemble the active ingredient in marijuana (THC). What’s even more interesting, the study also found cannabis-like substances may hold the key to healthy skin. 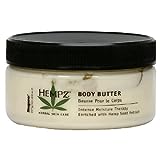 According to the study, the body produces cannabinoids for protection. “Just as THC is believed to protect the marijuana plant from pathogens, our own cannabinoids may be necessary for us to maintain healthy skin,” said researcher Gerald Weissmann.

Endocannabinoids regulate lipid production. The team of scientists said “endocannabinoids” are important in regulating lipid production and may therefore be useful in the management of problems such as acne and dry skin that are associated with sebaceous gland dysfunction. “Our pre-clinical data encourage one to explore whether endocannabinoid system-acting agents can be exploited in the management of common skin disorders,” said Tamás Biró, a senior scientist involved in the research. “It is also suggested that these agents can be efficiently applied locally to the skin in the form of a cream.” (i.e. Hempz Herbal Skin Care Body Butter)