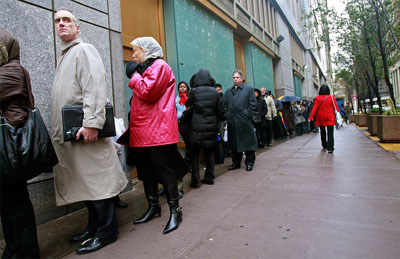 The Internal Revenue Service dangled career possibilities when it held an open house at the federal office building at 290 Broadway in Lower Manhattan on Tuesday. An hour before the fair was scheduled to begin, the crowd began lining up – recently laid-off Wall Street types in charcoal-gray pinstripe suits and trench coats; less formally dressed people; a woman with a new accounting degree on her résumé and a 14-month-old baby in a stroller.

Before their face-to-face encounters with I.R.S. employees, before they got a chance to hear about the agency’s “work-life balance” and its portable retirement plan, they had to do some waiting. The line for the career fair stretched along Broadway, turned the corner, ran down Reade Street and turned the corner again at Elk Street.

Once the job-seekers reached the lobby, they had to shed their umbrellas and rain gear. Following security guards’ instructions, they also had to remove shoes, belts and watches, and step through a metal detector.

Hope was an elevator ride away, on the 30th floor, where tables had been set up with handouts describing the particulars of different I.R.S. units. Employees of the agency were waiting to talk about their own careers but were not there to offer jobs on the spot. Most prospective applicants said they were told to go home and search a Web site www.jobs.irs.gov/  for positions they might be qualified for, and to apply online.