In The Matter of Gold Medalist LaShawn Merritt's Penis vs. Pockets 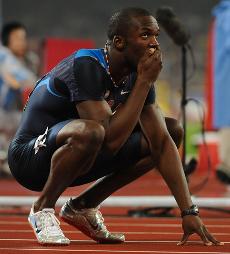 LaShawn Merritt, the 2008 Olympic track gold medalist in the 400 meters seems to think it does. Unfortunately, he can't win for losing as he currently faces smaller pockets with a two-year suspension for trying to grow a bigger penis with a male enhancement product that he claims he had no idea contained a steroid.

“To know I have tested positive as a result of a product I used for personal reasons is extremely difficult to wrap my hands around,” Merritt said in a statement.” I hope my sponsors, family, friends and the sport itself will forgive me for making such a foolish, immature and egotistical mistake. Any penalty I may receive for my action will not overshadow the embarrassment and humiliation I feel.”

Doug Logan, the chief executive of USA Track & Field, issued a statement that said, in part:

“Mr. Merritt has been an integral part of Team USA and the sport in this country. He has now put his entire career under a cloud and in the process made himself the object of jokes. In this day and age, a professional athlete should know better. Personally, I am disgusted by this entire episode.”