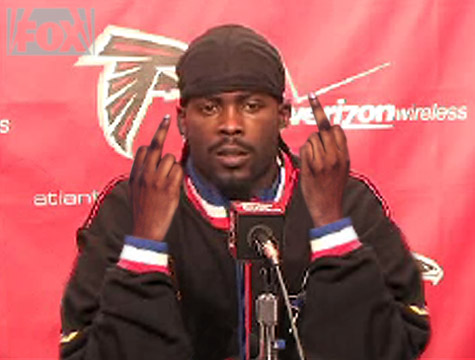 Just seven months after Michael Vick was sentenced to federal prison, the fallen Falcons quarterback found himself in a “precarious financial position” and filed for bankruptcy protection. One of his creditors is the Falcons.

In Chapter 11 documents filed in federal court in Virginia on Monday, Vick cites debts of between $10-50 million dollars. He also cites assets in the same range.

In the court documents, Vick lists seven creditors, including the Falcons, that are owed a total of $12.8 million. The debt to the Falcons is for $3.75 million, listed as a pro rated signing bonus. The documents indicate the claim is disputed.

A Falcons spokesman said the team would not comment on Vick's bankruptcy.

Vick is currently serving a 23-month prison sentence in Leavenworth, Kan. for his guilty plea in federal court to felony charges related to dogfighting. His release date is July, 2009.

“He is in the process of paying his debt back to society for the federal prosecution,” said Peter R. Ginsberg, Vick's attorney with the New York firm of Crowell and Moring. “This will give him the opportunity when he gets out to start his life fresh.”

The largest of Vick's creditors is Joel Enterprises with a claim of $4.5 million. Andrew Joel, a Richmond sports agent, filed a lawsuit against Vick in 2006 claiming he reneged on an endorsement deal agreed upon after leaving Virginia Tech early for the NFL.

Another creditor listed is Radtke Sports, of Woodstock, for $550,000. According to the attorney for Radtke, Vick had an exclusive autograph deal with the company and that he can no longer fulfill his obligation due to his imprisonment.