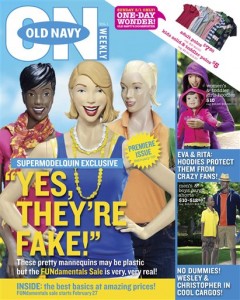 The latest advertising campaign from Old Navy is built around the soap-opera lives of its very own celebrities, 12 supermodel mannequins whose lives are chronicled with a breathless sense of celebrity obsession.

The campaign not only is creating serious buzz for Old Navy but has boosted the profile of Fusion Specialties, the manufacturer of the original “SuperModelquins.” The company is turning out 250 supermodel mannequins a day.

The Old Navy contract was the largest single order in Fusion Specialties’ history, and by the end of the first week in April, the largest custom-mannequin maker in the world will have sent out 13,000 mannequins to Old Navy stores.

The factory is running three shifts and has hired 300 temporary employees. Carts full of bodies, arms and heads are being moved from molding to casting to sanding to painting nonstop.

“This particular campaign is so sweet because this is our largest contract, and they put so much into it,” said Peter Huston, Fusion’s executive vice president of sales and marketing. “It is a 360-degree marketing campaign, and we are a part of it,”

The Supermodelquins in “Mid-Town Flash”

For more supermodelquin videos, where they're going and how they all came about, check out their youtube channel here.