Is It True What They Say: Men Will Sex Anything With a Hole? 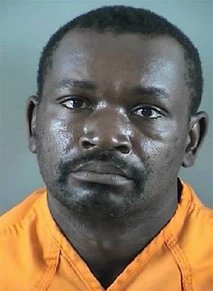 It was just last week or so I stumbled across a picture of a man in Nigeria being forced to have sex with a goat and I just frowned at the thought of how sick that is, and how tormenting that must have been for him.

I've always heard that a nasty man would have sex with anything with a hole, and sadly, I can't help but wonder if men can actually enjoy the feeling of penetrating an animal?

*PAUSE* — A South Carolina man caught on video having sex with a horse was sentenced Wednesday to three years in prison after pleading guilty for the second time in two years to abusing the creature.

Rodell Vereen was arrested in July after Barbara Kenley caught him entering the barn at Lazy B Stables in Longs, about 20 miles northeast of Myrtle Beach. She had been staking out the stable for more than a week after setting up a surveillance camera and videotaping Vereen's assault on her 21-year-old horse named Sugar.

Kenley said she became suspicious because her horse was acting strange and getting infections, and she noticed things were moved around the barn and dirt was piled up near the horse's stall.

It wasn't the first time she'd caught Vereen. In late 2007, Kenley found him asleep in the hay after assaulting her horse. For that offense, he also pleaded guilty to buggery, received probation and had to register as a sex offender.

On Wednesday, the judge sentenced Vereen to five years in prison, but he will only have to serve three years behind bars as long as he successfully completes two years of probation. Vereen also was ordered to undergo additional mental treatment after he gets out of prison and was told to stay away from Kenley's stable.

It's stories like this that just puts you at a lost for words.  I mean seriously, what more can you say besides WTF?