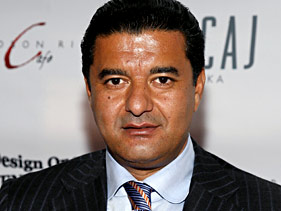 The New York businessman known in the hip-hop world as “Jacob the Jeweler” was sentenced Tuesday to 2 1/2 years in federal prison for lying to investigators looking into a multistate drug ring.

Jacob Arabov, 43, pleaded guilty in October to falsifying records and giving false statements as part of a deal with federal prosecutors, who asked U.S. District Judge Avern Cohn to impose a minimum sentence of three years and one month.

But Cohn decided to shave off seven months from that recommendation, citing Arabov's extensive charity work.

Cohn also ordered the Russian immigrant to pay a $50,000 fine and to make a $2 million forfeiture payment to the government.

“I feel ashamed that I broke the laws of this country, a country that has been so good for me,” Arabov said. “I will carry this shame for the rest of my life.”

Arabov was arrested in 2006 at his Manhattan jewelry shop. Authorities accused him and others of conspiring to launder about $270 million in drug profits.

Prosecutors dropped the money laundering charges in the plea deal.

Authorities accused Arabov and others of conspiring to launder drug profits for the “Black Mafia Family,” a ring that operated out of the Detroit area beginning in the early 1990s.

The seven-year investigation resulted in the indictments of Arabov and at least 41 other people, federal authorities say.

They say about 1,100 pounds of cocaine and $19 million in cash and other assets were seized beginning in 2000.

Arabov, also known as the “King of Bling,” became popular among hip-hop and R&B artists in the mid-1990s.

He launched a line of religious-themed jewelry with Kanye West, who later named him in songs including “Diamonds From Sierra Leone,” in which he asked, “These ain't conflict diamonds, is they Jacob? Don't lie to me man.”