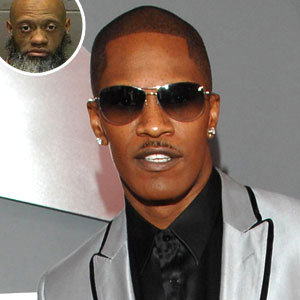 Jamie Foxx has people from literally all walks of life checking for him so it seems.

A strange man tried to enter Foxx's Philadelphia hotel suite last month by tricking him into opening the door – posing as one of Beyonce's producers.

After realizing he didn't know the man, Foxx got the better of the intruder by managing to keep him from fully entering the room and slammed the door.

The suspect fled the scene, but the law ultimately caught up with him.

Steven Taliver, 49, was arrested Tuesday on suspicion of stalking and other charges after Foxx's security team noticed the very same man who allegedly tried to bust into the actor's room hanging around near the set of Foxx's next movie, Law Abiding Citizen, and called the cops.

Philadelphia police confirmed to E! News Thursday that a trespassing incident did occur March 22 at the AKA Hotel in Rittenhouse Square, but would not divulge whether Foxx was the victim of an attempted burglary.

“There was an arrest,” a police spokesman said. “There was an incident. Someone was in an area they weren't supposed to be…inside the hotel.”

He denied that a physical confrontation occurred, but sources have told Philadelphia's CBS 3 that Taliver had tried to break into Foxx's room three times—March 22, 27 and 31—and on one of those occasions, Foxx forcibly removed the intruder from the room himself and slammed the door in his face.

A rep for Foxx, who was busy Thursday promoting his latest film, The Soloist, refused to comment, citing the ongoing legal matter.