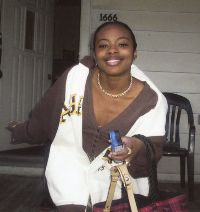 When Danielle Pickens, 19, got dressed on Easter Sunday in skimpy short shorts and a comfortable tee-shirt to join her cousin Evelyn Burgess and other family members for dinner, she probably didn't think the outfit would get her killed.

Family members say shortly after Pickens arrived at Evelyn Burgess' home, Burgess got mad her husband's eyes wandered and took notice of the t-shirt and jean shorts that Pickens was wearing.

According to police, Burgess and Danielle Pickens fought before Pickens walked outside and got into a car in front of the house. Burgess followed, pointed a handgun at her 19-year-old second cousin and shot her in the head.

Burgess, 42, told police that Pickens showed up at her house in an outfit that “was inappropriate and disrespectful to wear at Easter dinner.”