Founded in 1954 by George Ellis Johnson, Sr., Johnson Products, formerly headquartered in Chicago, has been a mainstay brand for more than a half-century in the African-American community. In 1971, the company became the first minority-run enterprise to be listed on the New York Stock Exchange. Today, Johnson Products offers more than 30 hair care product 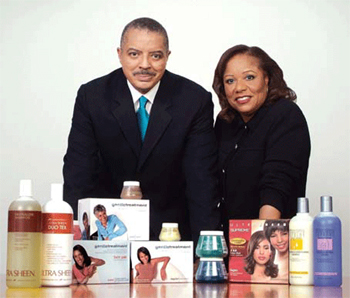 s, including the Gentle Treatment and Ultra Sheen brands. The company is headquartered in Los Angeles, with offices in Dallas.

Brown is joined by Renee Cottrell-Brown, who since 2006 operated a marketing consulting firm, Streetwise Marketing Solutions, based in Arlington, TX, which provides marketing services to start-ups and small-to-medium growth companies that market multi-cultural personal care products. She previously held a 25-year career with Pro-Line Corporation and Pro-Line International, most recently as global vice president of retail marketing.

“We are so excited to finally be able to tell our story! As former executives of Pro-Line Corporation which was sold some years ago to Alberto Culver, we longed to once again work for a company that contributed so much to a community that contributed so much to us. We took pride in building our company to be a source of pride. We increased employment, especially amongst black youth, created far reaching professional opportunities, supported our business partners, funded scholarships, and media projects such as national broadcasts which highlighted the achievements of our college students. Meanwhile, our competitor, Johnson Products Company was doing the same on his end: a commercial sponsor of Soul Train and through its Johnson Foundation, assisted many causes while they grew. We represent the next generation, and we bought it back.”